Medicinal herb garden in accordance with Hildegard of Bingen 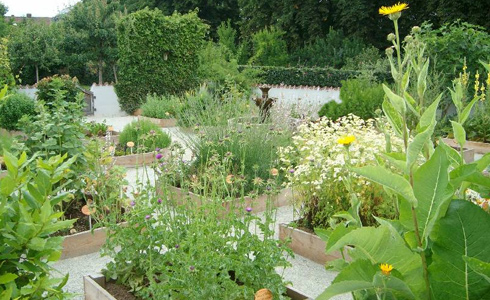 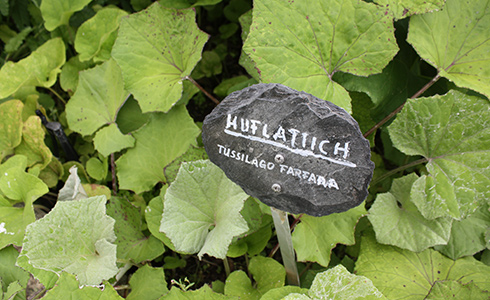 Care for your garden that was planted by the gift of God, and be on your guard that its herbs do not wither.

With the construction of the Hildegard Forum of the Sisters of the Cross in the 900th memorial year of St. Hildegard of Bingen, the public also received a medicinal herb garden in the design of a medieval model. The descriptions of such medieval gardens are sparse. Such gardens are more often passed down to us through representative art and rarely on tapestries.

Walafrid Strabo, abbot of Reichenau at the time of Ludwig the Pious and author of "Hortulus", a didactic poem about the medicinal plants known to him, designed at that time the garden plan for the monastery of St. Galten. We have obtained his description and sketch plan. Other Benedictine monasteries and future generations likely initially oriented themselves based on this. Typical cottage gardens emerged from this.

Walafrid arranged the beds at right angles and geometrically, surrounded by wooden planks and planted with only a single plant species. In the Hildegard medicinal herb garden on Rochusberg, we find up to four plants in one flower bed. Walafrid also describes the triple function of the perimeter wall: it has to protect against wildlife damage, keep seeds away from the surrounding environment and has a climate-regulating function. According to current information, this medicinal herb garden did not serve as the primary supply of natural remedies to the monastery convent and the surrounding residents, to which the monasteries were committed, but rather the seed offspring were used for the main beds, which are presumed to have been outside the monastery walls. This medicinal herb garden was often in the square courtyard of the cloister of a monastery.

The Hildegard medicinal herb garden on Rochusberg, including a newly landscaped orchard, presents about 80 medicinal plants and trees, whose medicinal properties Hildegard describes in her book "Physica". Her descriptions show that the medicinal plants do not act only of themselves. They point back to their creator and are graciously given to man for his healing. The medicinal herb garden designed by Professor Dr. Dieter Vogellehner, Freiburg, includes, with a few exceptions, non-toxic or low toxic plants. To the left are the plants that originally lived in the Mediterranean climate and on the right hand are our local plants.

The extremely strong interest among visitors in the first year of the garden's existence confirmed that the Sisters of the Cross, with their Hildegard medicinal herb garden, have enriched Bingen with another attraction.

Which plants can be found in our herb garden?