The life and work - Hildegard of Bingen 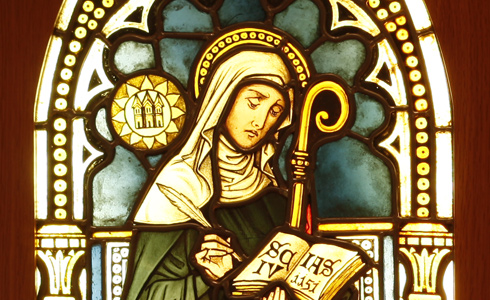 Man has three paths in himself in which his life acts: the soul, the body and the senses

Experience Hildegard's life and work in our permanent exhibition.

Hildegard's long life - she was 81 years old - is characterised by four life places: She was born in Bermersheim as the tenth child of noble parents. At eight years old, she was passed on to the Countess Jutta von Sponheim to be educated. Her next stop in life was Disibodenberg where at 14 years old she was closed into a hermitage with Jutta von Sponheim and lived in fertile clandestineness until 1150. The monastery Rupertsberg near Bingen, which she founded in 1150 against many resistors, is the place of her artistic work, literary creation and reformist action for 29 years until her death. She is the abbess of the monasteries Rupertsberg and Eibingen, which she founded in 1165 as a second monastery. 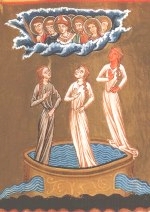 In the middle of the complete works is the visionary trilogy of the "Scivias" (Know the Ways), the "Liber vitae meritorum" (Book of the Rewards of Life) and the "Liber divinorum operum" (Book of Divine Works). The visionary images formulated here can be seen in all of her work. In the musical comedy "Ordo virtutum", they come to life, for example in allegorical figures. Hildegard's natural and naturopathic writings include the "Liber medicinae simplicis" (Book of Simple Medicines) and the "Liber compositae medicinae" (Book of Composite Medicine). Hildegard left behind an extensive correspondence, through which she was connected to emperors, popes, bishops and ordinary people. 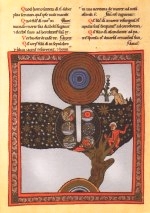 In visionary images, Hildegard viewed the creed of the church. She paints a large arch of salvation history: from the creation of the world and of man to the being and becoming of the church until the end of time. The history of God and man, of renunciation and devotion of man to his Creator, is propagated in ever new images. The infinite God holds each life in a loving embrace. That is the lasting message of "Scivias". 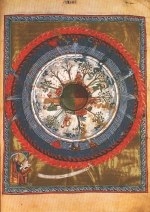 
The poet and composer

Hildegard complains that man has lost the connection to the harmony of heaven. For her, each song is a reminder of this heavenly harmony. Hildegard therefore sees music as a remedy, by which man is positively determined. She herself wrote 77 hymns, antiphons and songs, and the musical comedy "Ordo virtutum" in order to proclaim the good news of a boundless good God "who wants to save people and remain active in them in order to complete his creation". 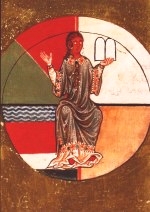 In her naturopathy "Physica", Hildegard lists 513 plants, animals, elements, stones and metals. She discusses 293 plants and their effects on people in detail, including the various types of cereals, vegetables, spices as well as many roots and herbs. In her natural study, Hildegard always describes the reality of creation in its healing power for the people. In her medical science "Causae et curae", that spiritual knowledge is felt that knows about the unity of man and the world, of nature and habitat. The basic theme of the medical science of Hildegard is to not only make people healthy, but to also "heal" them. She views all remedies as ways to salvation. 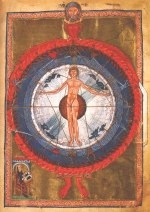 
The admonisher to healthy living

Hildegard's writings offer no recipes. All advice is determined by three objectives: healthy eating, which is mainly a moderate diet, increasing well-being, and relieving suffering through the conscious use of herbs and food. In her recommendations, which of course reflect the limited knowledge the 12th century, Hildegard deals with the specific people and also the different effectiveness of food. She gives advice to healthy people and also to sufferers. 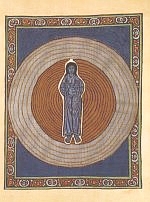 
All images are available as postcard scenes in our Hildegard store!